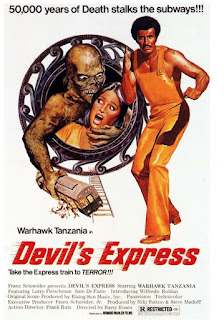 Devil's Express tries to do it all, and does well enough at what it attempts that it's very watchable. Part blaxploitation, part monster movie, part street gang kung-fu film - all these elements are half-way present enough to carry the viewer for an entertaining ride through a short runtime.

The movie opens in 200 BC China where a group of monks are dumping a coffin into a hole in the ground for safe keeping. Turns out, that coffin contains a demon that will be discovered 2000 years later by two kung-fu practitioners from New York while on a trip to Hong Kong to polish their kung-fu skills.


One of these kung-fu students is played by Warhawk Tanzania.


His sidekick, who is involved in the gang scene in 70s New York, finds a medallion in the aforementioned hole in the ground, releasing the demon to follow them back to New York. Of course, it has to kill a random Chinese businessman and inhabit his body to do so. Once back in New York, the demon decides it doesn't like the traffic noise and sunlight.


So, the demon finds a dark place to hide in the subway and begins to kill a few people. These gruesome (but largely off-screen) deaths arouse the suspicion of the police, who think that it's a result of the ongoing, horribly choreographed, kung-fu gang war.


Ultimately, Devil's Express tries to cram a lot into an extremely thin plot. It offers an excuse for a murdering demon, some gang war action, and a twinge of blaxploitation (the scene where Warhawk Tanzania hangs with his girl could be lifted straight from a Rudy Ray Moore flick). The movie pulls off enough to keep things interesting, and where it fails, it at least fails entertainingly.

You can find Devil's Express streaming on Amazon Video, or you can purchase the Blu-Ray from Ronin Flix. And if you like drive-in style B-movies, you should seek it out.
Posted by Gregor Singleton at 12:36:00 PM No comments: Links to this post 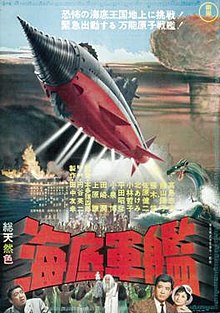 In this 1963 film from Toho, Agents from an ancient underwater civilization are attempting to kidnap people in Japan. Two photographers catch a glimpse of one of the Agents and become wrapped up in a plot that involves an underwater battleship submarine and a missing Navy Captain.

When the movie opens, Sumusu and Yoshito are conducting a photoshoot by the sea, a steaming man crawls out of the water just before a kidnap victim is driven right by them and into that same ocean.


The police are confounded by eyewitness reports of men who exude a high heat when touched, but pursuing the case, they find some corroboration. A strange reporter shows up the office of an ex-Navy Admiral asking about the development of an advanced submarine and a missing Captain Jinguji. At the same time, the two photographers are following a woman they believe to be so beautiful that she'll make the perfect model.

She turns out to be the daughter of the missing submarine Captain, now under the care of the ex-Navy Admiral. When a kidnapping attempt is made on the girl and the ex-Admiral, the photographers are able to thwart the plan, but the Agent escapes into the ocean. The advanced, ancient underwater civilization of Mu sends a filmed message threatening  destruction if construction on the submarine Atragon isn't stopped at once. Oh, and they also want to enslave the people of earth.


Luckily, the missing Captain Jinguji has been hard at work on the advanced submarine Atragon. Not so luckily, he's still got his mind on WWII and refuses to use the sub for any purpose that doesn't include WWII-ish stuff. Also, when a group goes to speak with him, they brought along that strange reporter, who just happens to be a spy for the Mu Empire.


While most Toho films of the era pitted two giant monsters against one another, this one is more about the war between the people of earth, the Mu Empire, and one Japanese captain's inability to let go of the past.


As with other Toho films of the era, this one includes an interesting take on dress and culture of the underwater (or alien) civilization.

There's even some brutal freeze-gunning when the people of earth finally fight back against the Mu Empire.

As long as you don't sit down expecting this film to be a Godzilla clone, you'll enjoy yourself. There's some really cool submarine action on display, but not much in the way of kaiju.

Poor Manda is on display here, but he doesn't get much screen time and doesn't even make it onto land.


As long as you know what you're sitting down to watch, there's some great stuff to enjoy in this film. You get the haphazard plot of a 60s Toho kaiju film that's light on the kaiju. Instead, the special effects are poured into underwater submarine battles, and plenty of miniature destruction that will feed the same needs as other Ishiro Honda films. Recommended for Godzilla fans, 60s Japanese sci-fi fans, and anyone in your life who might be Mothra's #1 fan.
Posted by Gregor Singleton at 4:27:00 PM No comments: Links to this post 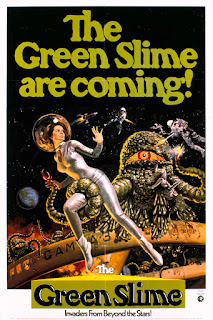 The Green Slime (1968) is not a terribly good film, but it has a few interesting elements that make it worthy of watching. The most notable of these features is that the film is a joint production between Toei (Japan) and MGM. Shot in Japan with an American cast. This means it's like watching Battle in Outer Space (1959) but with actors you might see in Fantastic Voyage (1966).

The story begins as we discover an asteroid is on a collision course with Earth. Retiring Commander Rankin (Robert Horton) is sent with a team to detonate it before all life on the planet is destroyed upon impact. That team includes the fiance of Rankin's former girlfriend. The mission is successful, but the team inadvertently brings back a hitchhiking specimen onto the space station with them - The Green Slime.

And that's all in the first act, so this is not a movie that's slow to get started.

Once on the space station though, the story focuses on a race to figure out the evolving Green Slime and keep it from reaching Earth.

Most of the drama in the film comes from the love triangle clashes between the two dueling commanders. And by drama, I mean groan-worthy arguments and snark that amounts to little more than a series of pissing contests while the threat to the space station increases, people die, and the possibility of unleashing the Green Slime on Earth grows larger.


Even as the story is solid and the threat is straight-forward, the relationship between the two rival Commanders (and former best friends) is incredibly annoying. The best thing to alleviate this distraction is to focus your attention on the fantastic set work, costuming, and of course, The Green Slime creatures (which all look like something that you might see in an episode of Ultraman).

Recommended if you've never seen The Green Slime (1968), if you're wondering about the predecessors of the Alien franchise, or if you need an easy way to explain how annoying a pissing contest can be.
Posted by Gregor Singleton at 11:56:00 AM No comments: Links to this post